If you’ve ever wondered what a Google search algorithm update is, what it might mean for your website and if there’s anything you need to do when Google rolls one out, then this is the guide for you.

I’ve been listening to my clients and have put together some of the most commonly asked FAQs about Google updates with some common sense advice about what this means for your website.

What are Google’s search algorithms?

Without a search facility, finding information online would be like walking into a library containing all of human knowledge and then finding the information you need on a single page in a single book without knowing where to look for it.

And, given the sheer size and complexity of all of that knowledge, it would be all but impossible for humans to sort through it and catalogue it manually.

Instead, search engines such as Google were developed using a series of algorithms (e.g. “a list of rules to follow in order to solve a problem”) to sort through the content published on the web.

How do Google’s search algorithms work?

As well as cataloguing and indexing web pages, search algorithms cleverly take into account numerous factors about the end material, its creator and the searcher to try to give you the most relevant and valuable search results.

These factors include, but are not limited to:

Google’s algorithms will also try to understand the context of a search, which can affect the search results they deliver. For example, in its help guide, the search engine says that, “the freshness of the content plays a bigger role in answering queries about current news topics than it does about dictionary definitions”.

Why does Google change its algorithms?

Google now processes a staggering seven billion search queries a day. Unbelievably, 15% of those queries have never been searched before! As of June 2019, the indexed size of the web is at least 5.25 billion pages.

Indexing, crawling and understanding this content is a never-ending task.

As staff at Google learn what works and what doesn’t, they’re able to fine tune the algorithms, making small, precise revisions once or twice a day.

Also, Google is increasingly moving away from man-made algorithms to machine-generated (Machine Learning) algorithms. As explained in a blog by Sistrix:

Where the creation of these algorithms used to be the task of humans, the machine learning takes over. The human being must still provide the training data and monitor the process – but the computer writes the algorithm based on the findings “learned” from the training data.

Each tweak is designed to improve the search results delivered in response to every unique search query.

As we can see from the tweet below from Google’s Search Liaison account, these tweaks may be focused on specific improvements, technical updates, or more broad changes but they’re usually very minor. 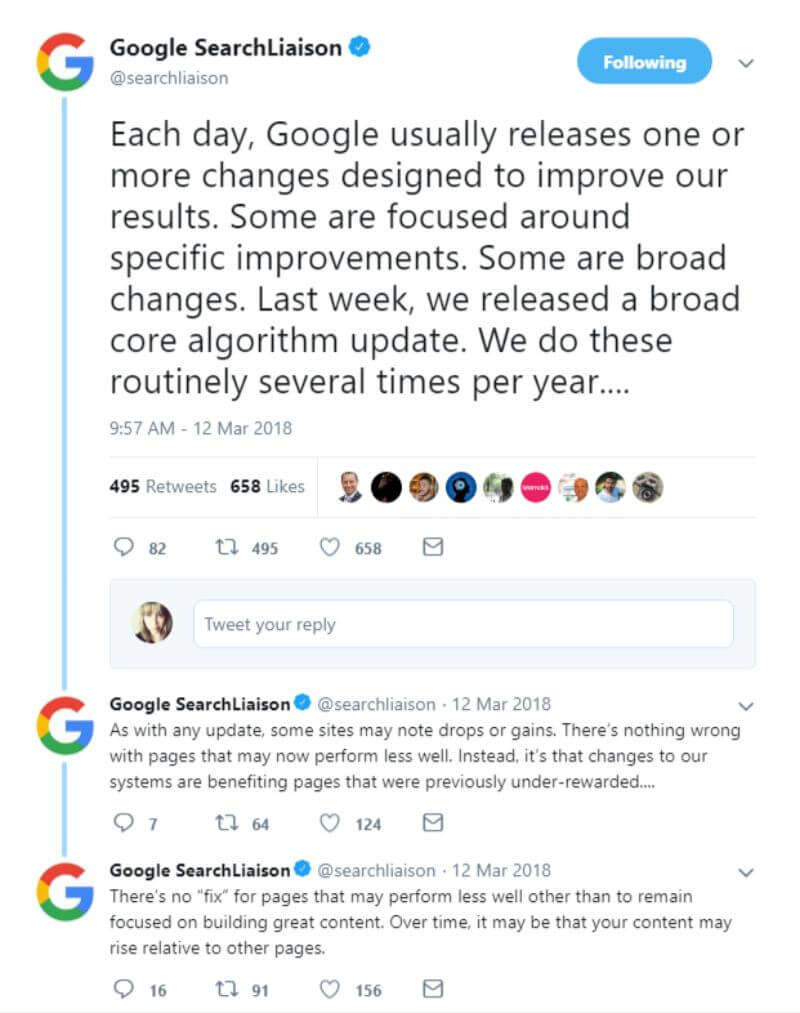 What is a Google Broad Core Algorithm Update?

A broad core algorithm update is more significant because it’s a change, be it big or small, to Google’s main search algorithm.

As the tweet above mentions, broad core algorithm updates happen, usually routinely, once or twice a year.

There is a degree of mystery surrounding Google’s broad core algorithm updates because the search engine rarely maps out the changes and their impact.

Our best understanding is that, through a broad core algorithm update, Google slightly tweaks the importance, values, weight and/or order of its various ranking signals.

Pages may see a change in their rankings, either up or down, but it’s probably based on multiple factors caused by the tweaks, rather than one thing you’re doing incorrectly or correctly as a webmaster. Google provides guidance about core update updates in their blog

Why do algorithm updates happen?

As a business, Google’s goal is to give its customers the best search results for their individual needs. It wants someone to be able to make a search and immediately be taken to a web page that gives them exactly what they were looking for.

But the factors that affect search are constantly changing and evolving too. Technology, website design, our understanding of search psychology, artificial intelligence and voice searches – these things all influence how and why we search.

Google’s algorithms need to be adapted to keep up with this evolution.

Every once in a while, Google does a major algorithmic update that makes the news and shakes up rankings enough to grab attention.

You will no doubt have heard of updates such as Google Panda, Google Penguin, Google Hummingbird, the E-A-T algorithm (AKA ‘The Medic Update) and others.

Where these updates differ from a broad core update is that they’re typically rolled out to address a specific issue rather than affect the ranking algorithms more generally.

Let’s look at a few examples:

Moz has put together a comprehensive list of broad core updates and focused algorithm changes, both confirmed and unconfirmed, that you might find of further interest.

You can find a list of algorithm updates here too.

It’s worth noting that Google doesn’t always confirm or pre-warn people about algorithm changes. Sometimes we are only able to surmise that they’ve happened when multiple sources notice a fluctuation in rankings.

What is the June 2019 core search algorithm update?

In a rare move, Google pre-announced its latest (at the time of writing) broad core search algorithm update, which began rolling out on 3rd June 2019.

The natural assumption was that this must be a ‘big’ update if Google thought tell people about it in advance.

As we can see from the tweet below, Google’s Public Search Liaison, Danny Sullivan, insisted that it was ‘nothing special or particular (sic) ‘big’ and that Google just wanted to be ‘more proactive’ rather than ‘people scratching their heads after-the-fact’. 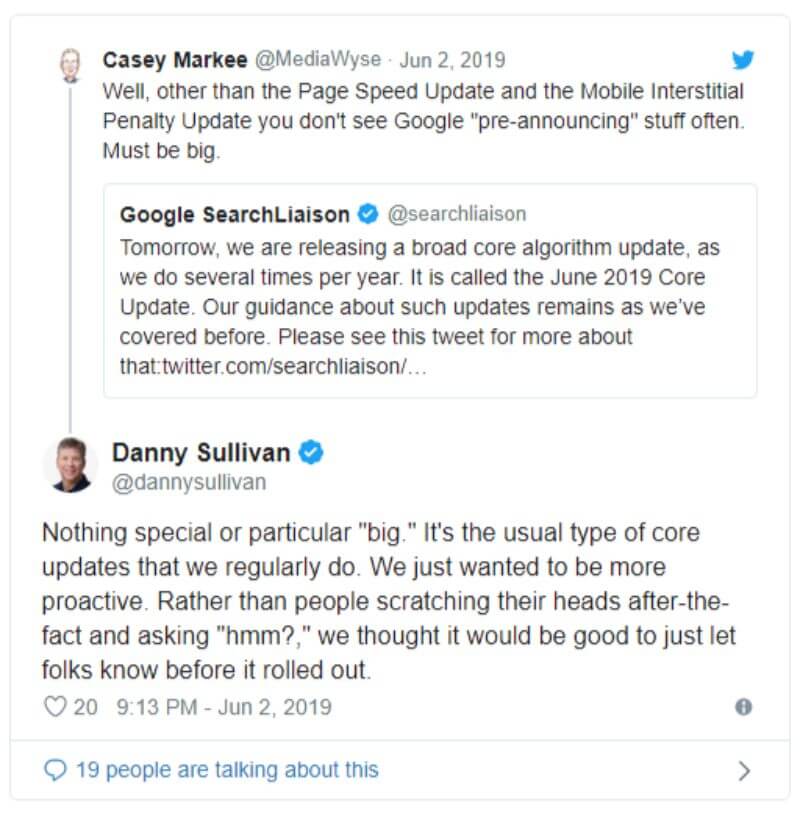 However, within three days of the Google algorithm update, online sources such as Search Engine Roundtable were abuzz with the news that Jesus Mendez, the SEO director at MailOnline (The Daily Mail’s website) had been on the Google help forums to report a 50% loss of daily search traffic and 90% loss of Discover traffic.

Sistrix looked at data from the Google UK Index to identify the ‘winners’ and ‘losers’ of this update. It would appear that news, medical and financial sites have all seen the biggest fluctuations.

News sites mirror.co.uk and thesun.co.uk experienced a 54% gain in traffic, while dailymail.co.uk saw a 43% loss.

Meanwhile, health-focused websites such as healthline.com, verywellhealth.com and psychologytoday.com all benefited from gains (33%, 29% and 19% respectively), while nuffieldhealth.com, mindbodygreen.com and psycom.net all had a significant drop off in traffic (-35%, -30% and -18% respectively).

Interestingly, metro.co.uk, which belongs to The Daily Mail Group, was one of the update’s winners.

The MailOnline case is particularly interesting because, although it’s the most visited English-language newspaper website, many people question the integrity of the site. It’s seen to be spammy, full of ads, slow to load, factually unreliable and with a distinct political agenda.

As Sputnik International points out:

the integrity of MailOnline’s journalism has been called into question — as part of a feature allegedly designed to fight ‘fake news’, Microsoft browser ‘Edge’ warns users against trusting content on the site, asserting it “generally fails to maintain basic standards of accuracy and accountability” and “has been forced to pay damages in numerous high-profile cases.

It is likely that Google’s latest update is, to some extent, about downgrading sites that make claims without being able to support them with factual evidence.

How will broad core algorithm updates affect my website?

Naturally, your number one concern about algorithm updates is likely to be if and/or how they will affect your site’s rankings.

Here’s a reminder of what Google has to say on the topic: 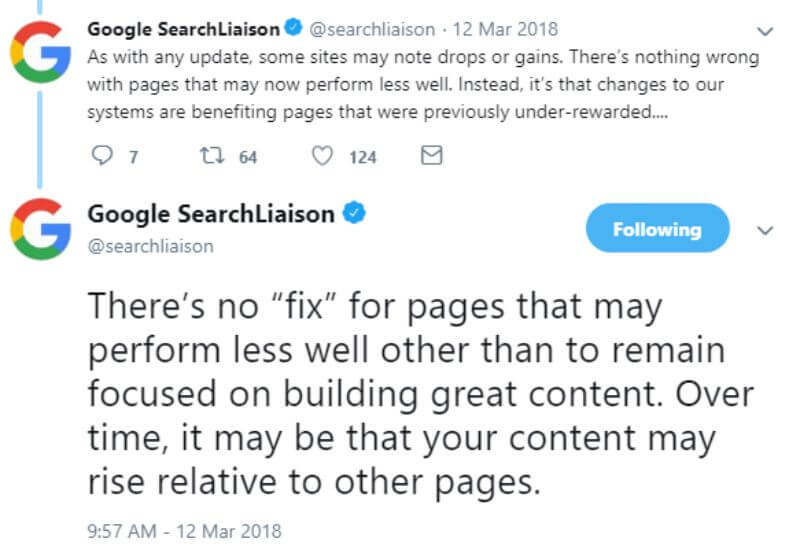 Generally speaking, most websites just experience minor ranking fluctuations in response to a broad core algorithm update, if at all.

If you notice more significant changes, especially a drop to your rankings, it’s worth exploring who else was impacted by the algorithm change and why your site might have been affected.

For example, the Medic update caused websites that had a potentially negative impact on searchers’ lives and/or finances to plummet in rankings. Meanwhile, it rewarded sites that were able to demonstrate a high degree of authority and trustworthiness. Sites that took a hit needed to review how they supported their claims and protected their customers.

How can you tell if a core update has affected your site?

If you keep an eye on your website traffic in Google Analytics, you should see a rise or fall in your number of visitors within a day or two of a core algorithm update.

With the June 2019 update, for example, changes to search volumes and rankings (found in Google Search Console) tended to show around 5th or 6th June.

What can I do so that algorithm updates don’t have a negative impact on my site?

The best thing you can do to protect against negative outcomes from Google’s algorithm changes is to follow the search engine’s guidelines and focus on providing value to your audience.

Look at how you can improve your website’s authority/quality score by offering content that is:

When creating content, put the user experience at the heart of everything you do.

Think about what your clients want to know and strive to give it to them. Check your content for errors. Make quality your priority.

Research everything you create extensively and always link to supporting evidence and wider resources. Only make a claim if you can back it up – cite your sources!

If you approach your SEO with a genuine intention to serve your audience then you should see positive results on an ongoing basis and have nothing to fear from broad core algorithm updates.

How can I help my site recover from a drop in rankings after a core update?

If the worst does happen and your rankings drop after a core update then I would suggest that you look at which pages, in particular, have been affected.

You might want to consider conducting a content audit or a broader audit of your entire website to identify potential problems, such as page load speed or a poor mobile experience.

Armed with these insights, you’ll be better able to prioritise what changes you need to make to your website to improve the user experience. As visitors to your site begin to spend more time on it and go deeper into your content, this will send signals to Google that your content is of value.

Over time, you should see a noticeable upturn to your rankings.

Some great reads about Google’s algorithms

I’ve linked to lots of information about Google’s core updates throughout this blog but you might also enjoy the following articles:

Hopefully, I’ve been able to put your mind at rest about Google’s broad core algorithm updates. Keep focusing on your audience and you will be rewarded.

If you would like further help and SEO support, feel free to contact us about which SEO package would be best for your business or book a free 30-minute call with me here

And don’t forget to grab your copy of my free SEO checklist before you go – it’s a fantastic starting point.

If you enjoyed this post and found it helpful, we’d love it if you shared it – thank you, it’s much appreciated.

Hazel Jarrett, director of SEO at SEO+, provides no-nonsense SEO that works. She has helped to grow a large number of companies across a variety of industries and has gained a big reputation for delivering the results that matter.
Follow Hazel on Twitter (@SEOPlusMore), Facebook and LinkedIn